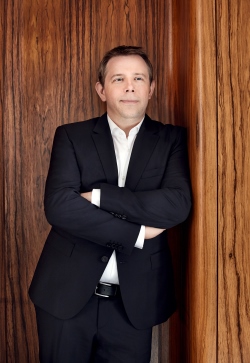 Simon Kissel, Managing Director and owner of Kissel Ventures GmbH, can be described in two words: Persistence and devotion. Already at the age of seven, Kissel started programming and he has already learned this himself without being instructed. It is not uncommon to find the inventor of the patented Viprinet router technology immersed in the source code of his products, because that is Kissel's passion. As a teenager he found his way into the "demoscene", a community of computer artists and developers, and was guided by the limits of what is feasible. So it's no wonder that his first job had to do with computers: He opened a specialist shop for IT and computers in his hometown as a teenager.

Kissel is a doer. When he sees a problem, he tackles it and tries to find a solution. That's how it was with the computer shop, because he saw the problem in the fact that something like this was missing in his home town. When he realized that he had the technical, but not the business management skills to do so, he drew the consequences - and did not give up, but rather closed the business to concentrate more on programming his best-selling product, a software for internal corporate communications and web-based live chat. He transferred the experiences of his first company to the second, and when he came across another problem, the lack of local Internet access, Viprinet's idea was conceived in its present form.

Many programmed nights, hair-raising deals with Asian chip manufacturers and difficult negotiations with numerous investors later on, Kissel was able to found Viprinet in 2005, and with it the development of not only a software, but also a suitable hardware to bundle several Internet accesses to a total connection with accumulated bandwidths. Today, this company, which was born out of necessity, has 50 employees, generates sales in the millions and even has a branch in Silicon Valley, California.

None of this would have been possible without Kissel's persistence in opposing circumstances and his devotion to programming. Only in this way he was able to inspire investors and employees for his cause again and again on his way, even if it surely comes to friction again and again because of his rather controversial character. Nevertheless, this is also a trademark of Viprinet: a router manufacturer whose management is the responsibility of a sophisticated programmer.

Now that Viprinet can be considered an adult, Kissel is gradually withdrawing from the operational business, with vision and innovation continuing to be his responsibility. This gives him the time to successfully drive his own and foreign start-ups to market maturity with Kissel Ventures GmbH. The current projects and investments of Kissel Ventures are described under Investments.

Since Kissel has been strongly represented on the Internet since 1995, he has one day arranged himself well with giving a large part of a public and transparent life. On his private website, Kissel tells his business and personal life story willingly and in great depth.